The August excavation at Elagh Castle follows-on from work undertaken by the CAF earlier this year on behalf of the NIEA - a geophysical survey (February) and an evaluative excavation (March).

The results of the survey have enabled five target-features to be identified for further archaeological investigation. Two of these, on top of the mound, were opened in March (Trenches 1 and 2), and Trenches 4 and 3 (Trench 3 will be a bit smaller than what is suggested on the plot below..) will be excavated this August, time and weather permitting. 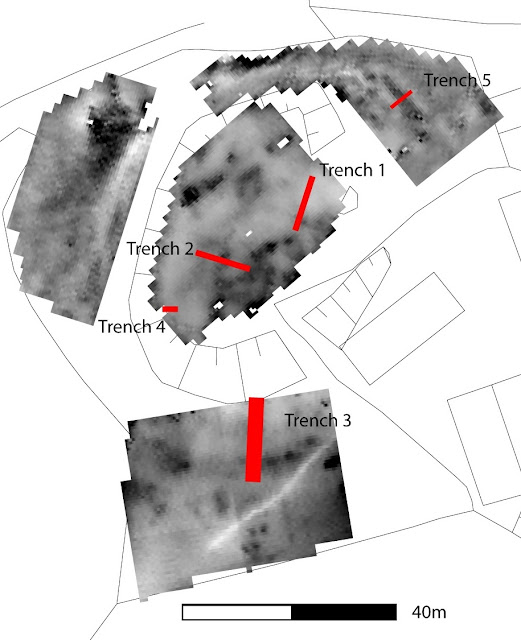 TRENCH 3: A low resistance arc surrounding the base of the outcrop was noted in the survey. This may mark the location of an artificial ditch, perhaps some 3m in width, or may be natural where water has accumulated. More intriguing is the fact that this possible ditch seems to be placed to the rear side of another geophysical anomaly ('white line') that may be a stone wall surrounding the northern edge of the outcrop. The location of this anomaly is exactly in line with the field boundary to the western side of the monument. This could mean that the feature is the robbed-out stretch of boundary wall to the north of the castle, or – alternatively – that the western boundary lies on the line of a medieval (or earlier?) boundary wall, the northern remains of which have now been shown up through the geophysical survey. Given this, the ditch anomaly may represent either a natural feature or a ditch that predates the construction of the stone boundary wall; establishing whether the wall is of Medieval or Early Modern date might in turn help explain the date and function of the ditch. This would require a large excavation trench to resolve.


TRENCH 4:  Both Davies and Swan (1939, 203) and Jope et al. (1950, ) noted the existence of a what seemed to be the foundation course of a small building located at the south-west corner of the summit enclosure. From its location on the perimeter of the enclosure it can be speculated that this feature is the remains of a wall-tower designed to provide additional defensive strength to this corner of the castle. To establish whether this is indeed the case we will open a small excavation trench across the line of this feature.